Let me start by saying that of all the times that I have been to SolidWorks World, Monday was easily the most memorable.

This General Session began differently from all of the others that I have attended – I was asked to arrive early, go to a secured entrance that contained a list of “special guests”, and I needed to bring my wife Jade.  Getting to see the General Session area prior to the doors opening was a new & unique experience – 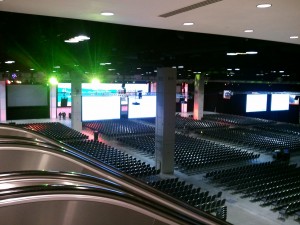 Not knowing what to do, we walked up to a group of SolidWorks employees near the stage. Fortunately, one of them asked if they could help us, when we explained that we were told to be there, they said that there were seating assignments, and they helped us find our seats (“rock star seating” does not even begin to describe our spots) – 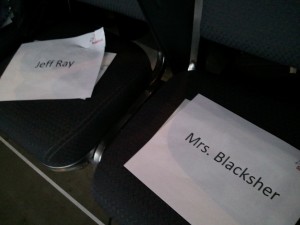 (Yes, my wife’s “assigned seat” was right next to Jeff Ray) – For the handful of you that don’t recognize the name, Jeff is the former CEO of SolidWorks.  He was recently promoted to Executive Vice President of Geographic Operations for Dassault Systemes.  He’s a pretty big deal within the SolidWorks Community, but more importantly, he’s a super nice guy – I talked to Jeff and his wife for quite a while at the tweet-up on Sunday night. 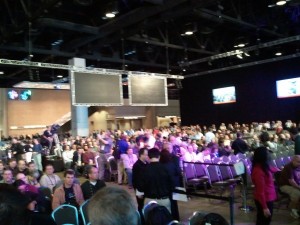 Since San Antonio is his hometown, Jeff Ray was the obvious choice to kick off the General Session.  Jeff talked about the rescue of the Chilean miners, as well as a new product for treating jaundice in infants from Design that Matters, and even recognized a small contingent of die hard attendees that have NEVER missed a SolidWorks World.   Jeff also introduced Bertrand Sicot, the newly appointed SolidWorks CEO.  After thanking the SolidWorks development team and discussing the growing number of DraftSight downloads, Bertrand said this –

This clip was taken from the SolidWorks Video of the Day 1 General Session, the complete video can (and should) be viewed here – http://www.youtube.com/watch?v=P3BbfGb-Al4

While Bertrand was talking about us, this is the image that was on the big screen behind him – 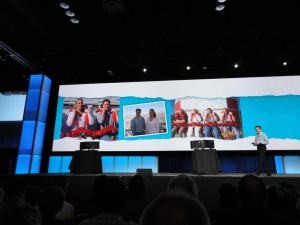 This image was taken by Ricky Jordan, and was found on the Flickr SolidWorks World 2011 photo collection, which can be found here: http://www.flickr.com/search/?q=SolidWorks+World+2011

A little bit of trivia about the photos that were shown:  They were all from our actual wedding, which took place on top of the Stratosphere in Las Vegas during Solidworks World 2006.  We exchanged our vows and then we were launched high above the Vegas skyline on the Big Shot.  We even met the Mythbusters (the special guests at World that year) when we returned to the conference after getting married!

I was still in a state of shock about our little “surprise” when they brought out the keynote speakers Gene Krantz and Jim Lovell.  Everyone should remember them for their roles in saving the Apollo 13 mission from imminent disaster.  Gene was at mission control and Jim was in the space capsule.  They had to work together as a team despite the fact that they weren’t even on the same planet at the time!  One of the details that amazed me the most during their presentation was how young they were at the time – most of the people involved in the mission were in their twenties!  I have always been a HUGE fan of the space program – NASA truly epitomizes the idea that if you work hard enough, anything is possible.  This was easily one of the best keynote speeches that I have ever seen period.  If you don’t believe me, use the youtube link above to watch their presentation – In-cred-ible!

Sunday was relatively open for us to spend some more time exploring San Antonio – nothing on “the schedule” until the early evening Opening Reception at the Partner Pavilion.  I wasn’t signed up for any of the certification testing, I was not participating in the alpha testing, and for the first time in several years I was not attending the AE Workshops (These are for the Application Engineers that work for SolidWorks resellers.)  My only immediate plan was to hit registration first thing in the morning (word to the wise, get it out of the way as early as possible to avoid waiting in lines.)

As predicted, registration was a breeze, no lines whatsoever.  I picked up all of my “goodies”, and I dig the backpack – quite compact, yet it holds a ton of stuff.  I had a chance to chat with Richard Doyle (User Group Head Honcho) for a little bit.  It is always great to see Richard – I worked with him a lot when I was starting the SolidWorks User Group of Nebraska (SwugONE) – He is definitely one of the people that helps bring the SolidWorks Community closer together and feel more like a big family.  (Richard was also one of the first recipients of my “business card/keychain/bottle openers” – If you got one, you know what I’m talking about, if not, look for me at SolidWorks World 2012 – I’ll have a new variation.)  Wayne Tiffany was also milling about the registration area, always good to see him and catch up on all things SolidWorks.  (Wayne is a User Group leader from KC, and a perennial SolidWorks World presenter.)

After wandering around all day, it was time to go to the Opening Reception.  The Partner Pavilion was jam packed with vendors, attendees, and all kinds of cool products that were designed in SolidWorks.  The opening reception is a great time to mingle, chat up the various vendors, and see all of the new technology.  I left the opening reception a little early to head off to the tweetup.

This year the tweetup was held in conjunction with a User Group leader gathering, so there were a lot of familiar faces.  It was nice to finally meet some of the people behind the tweets.  It might be because I’m watching the Oscars, but I feel the need to name just a handful of them;  Josh Mings (SolidSmack) – Had to chase him down for some of the sweet new SolidSmack stickers, Lou Gallo (SolidWorks Heard) and Jeff Mirisola – was “stuck” between these two at a DriveWorks certification event years ago, always good to see these guys, Ed Gebo – user group leader and all around cool guy, Charles Culp – actually grew up very close to where I now live (it is indeed a small world, but I wouldn’t want to paint it), Anna Wood (SolidMuse) – benchmarking guru and Red Wings fan, Phil Sluder – King of the Tips & Tricks presentations, Scott Baugh – It was very interesting talking to another person that used to work for a reseller and is now back on the user side of the fence,  and Matthew West (SolidWorks) – we have him to thank for putting together the tweetup, he did an awesome job – here’s hoping for many more!

After a crazy long day it was time to catch a few hours of sleep before the first General Session of SWW11.

Time to tell the tale of SolidWorks World 2011.

I thought that it would be a good idea to break this up into small chunks over the next couple of days, so I will start with our arrival in San Antonio on Saturday . . .

My wife and I thought it would be fun to go to San Antonio early and explore the city, and I am so glad we did.  San Antonio is a beautiful city with really nice people (our cab driver Ray was incredibly welcoming and full of trivia.)  We checked into our hotel, dropped off our bags, and hit the riverwalk to find some of our friends that also flew in early.  On the way to meet up with them, we ran into several attendees and a couple of the Territory Technical Managers from SolidWorks that I used to work with during my time as an Application Engineer.  I was surprised by the number of people that were arriving on Saturday – there are a few sessions and certification testing on Sunday, but the conference itself doesn’t “officially” kick off until the opening reception Sunday night.  I hope to see more of this in the future – do yourself a favor and spend a day wandering around the host city before diving into the conference.  I think that we are going to start staying another night after the conference to unwind and hang out with new friends.  This tip was shared with us on Tuesday when Phil Sluder was paying tribute to Michelle Pillers (more on this in an upcoming post.)

I knew that this year would be a lot of fun, because there were 3 people from our local user group (SwugONE) that were attending for the first time.  There is nothing quite like your first trip to SolidWorks World, and it was exciting to be able to share this experience with them.  We spent most of the day hanging out, wandering up and down the riverwalk, visiting the Tower of the Americas, and enjoying Tex-Mex.  Plans were made for Sunday’s activities, and then we finally called it a day.

I was fortunate enough to win my conference pass in an early bird contest through the SolidWorks blogs.  I was extremely stoked about this – I wasn’t able to go to World last year, and this year wasn’t looking very promising.  Having been to SolidWorks World in the past, I can honestly say that it is really a drag when you aren’t able to attend. (Following the proceedings via twitter just isn’t the same as being there.)