I was setting up the blog right before SWW11, and I started blogging about the conference shortly after returning home.  I was going through some of these old blog posts recently, and noticed that I posted one the night before my world changed.  I was involved in a very serious car accident about a month after getting home from San Antonio.

I wrote about it here: Todd’s Accident

This was right around the time that SolidWorks was announcing the dates/locations/sign-ups for the SWUGN Summits.  I was really looking forward to attending the Summit, and was anxious to get registered.  Probably a little too anxious if you ask my wife . . .

This is me, the day after being transferred out of the Intensive Care Unit, but still in the hospital.  Despite having 3 broken ribs, a partially collapsed lung, and head trauma that caused serious double vision, I was on my phone registering for the SWUGN Summit in my region.  It still seems really weird that I felt a “need to get registered” while I was still in the hospital.  When I went to the event a few months later, it was announced that I was the first person to register for the event, and that won me a free pass to SWW12!

On to SolidWorks World! 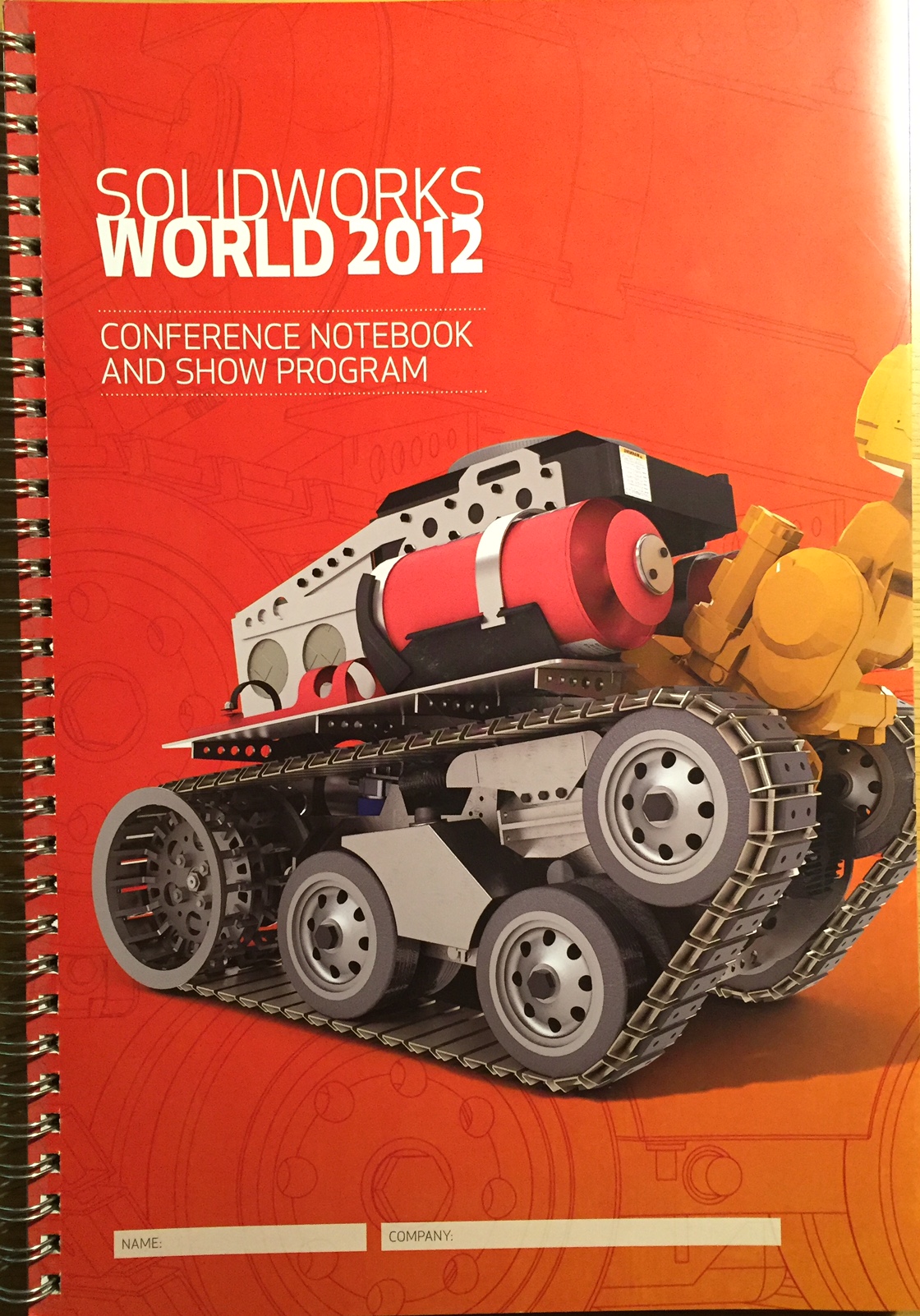 To continue with the tradition of having great presenters from various television shows, SolidWorks brought in Mike Rowe from Dirty Jobs.  It is always fun to hear people talk about doing what they love, and you can tell that Mike really enjoys his job!

Joe Dunne from SolidWorks sat down to interview Tony Fadell.  If you don’t know Tony, he has been dubbed the “Father of the iPod” – He is on a new adventure now, he created the NEST learning thermostat.

Funny story here:  A friend that I used to work with sent me a promo video for the NEST thermostat a few weeks before SolidWorks World.  I thought it was awesome.  I showed my wife, and she thought it was neat, but was not blown away.  About halfway through Tony’s interview I noticed my wife was messing with her phone.  I asked what she was doing, and she said she was pre-ordering a NEST thermostat! (I’m sure that there were a lot of pre-orders that came from that interview.)

Geoff & Mike Howe from Howe and Howe Technologies (and various Discovery Channel shows) spoke about a lot of their projects as kids, all the way up to some of their most current projects.  Ben Kaufmann from Quirky.com gave an overview of how Quirky is able to help people develop their products and get them to market more efficiently by making it possible for them to easily collaborate and share ideas with others around the world.

This was the second year of my “keys”, and I decided to keep the same basic design, but turn it into a handy sheet metal gauge – I’ve gotten some use out of this one –

This would be the last year that my CSWP ribbon would get me into the “CSWP Special Event” – Starting at SolidWorks World 2013 it is “CSWE Only”. 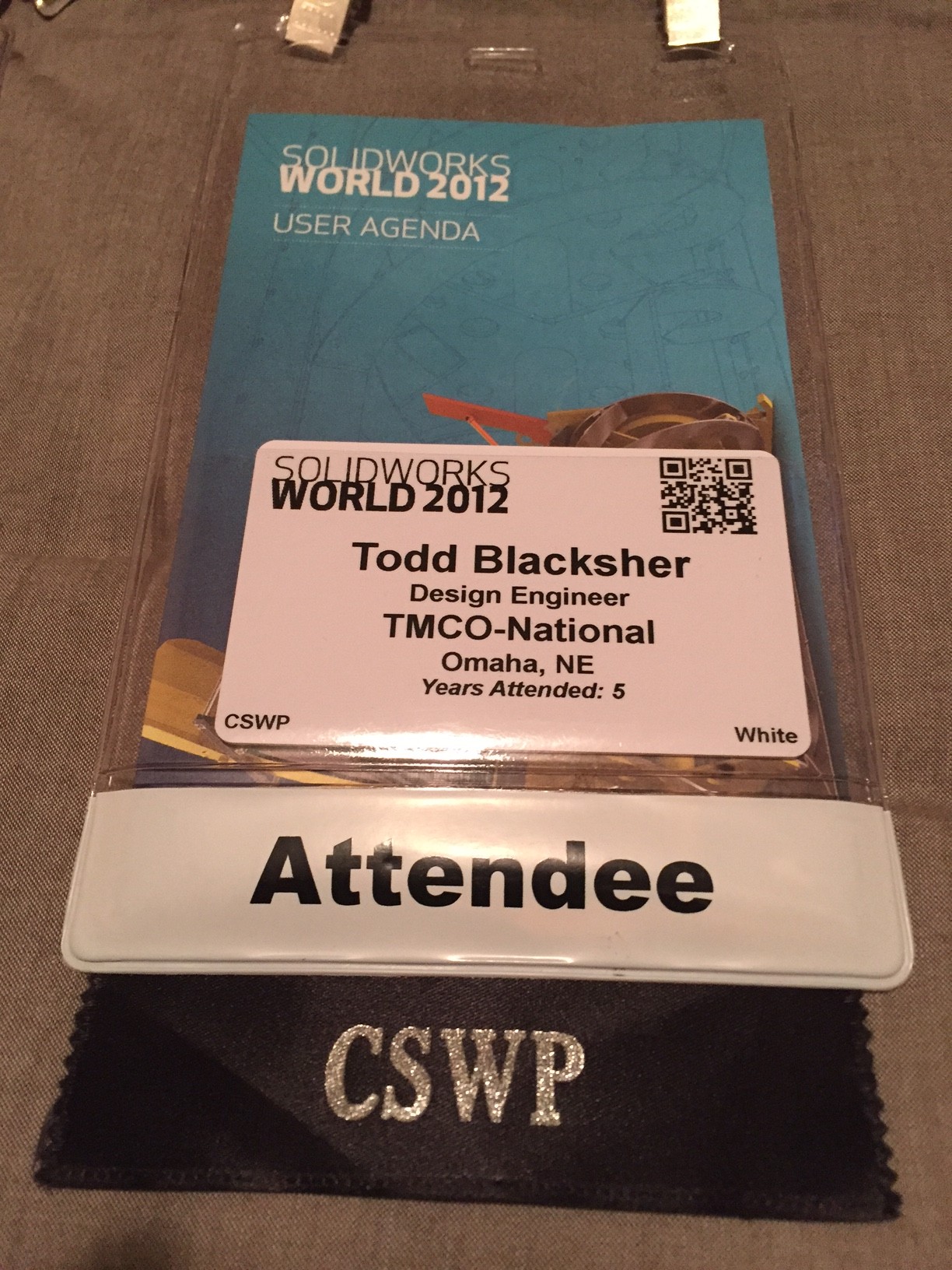 I figured that I should probably get around to taking the certification tests to get my CSWE, but this was my 6th time at SolidWorks World, and it was the first time that I had ever attended the event.  (It was a great event, held on the Midway aircraft carrier!)

It was announced that SolidWorks World 2013 would be back in Orlando!

Funny story from San Diego:  Toward the end of the conference, I was on my way to a session when I ran into one of the customers that I worked with when I was at the VAR. We were talking about the presentations that we liked, we didn’t like, and what we wanted to see.  I told him that I was really hoping to see something about the new Costing package in SolidWorks.  He just pointed to the monitor outside the room next to us, and the next presentation was an Intro to Costing.  I tried to explain that when I register for sessions, I do a quick scan for certain presenters/topics, and this was scheduled opposite Phil Sluder’s presentation, so I didn’t even “see” it.  (I ended up going to Phil’s session anyway – it’s a safe bet that you will always find me in the room when he is the presenter.)