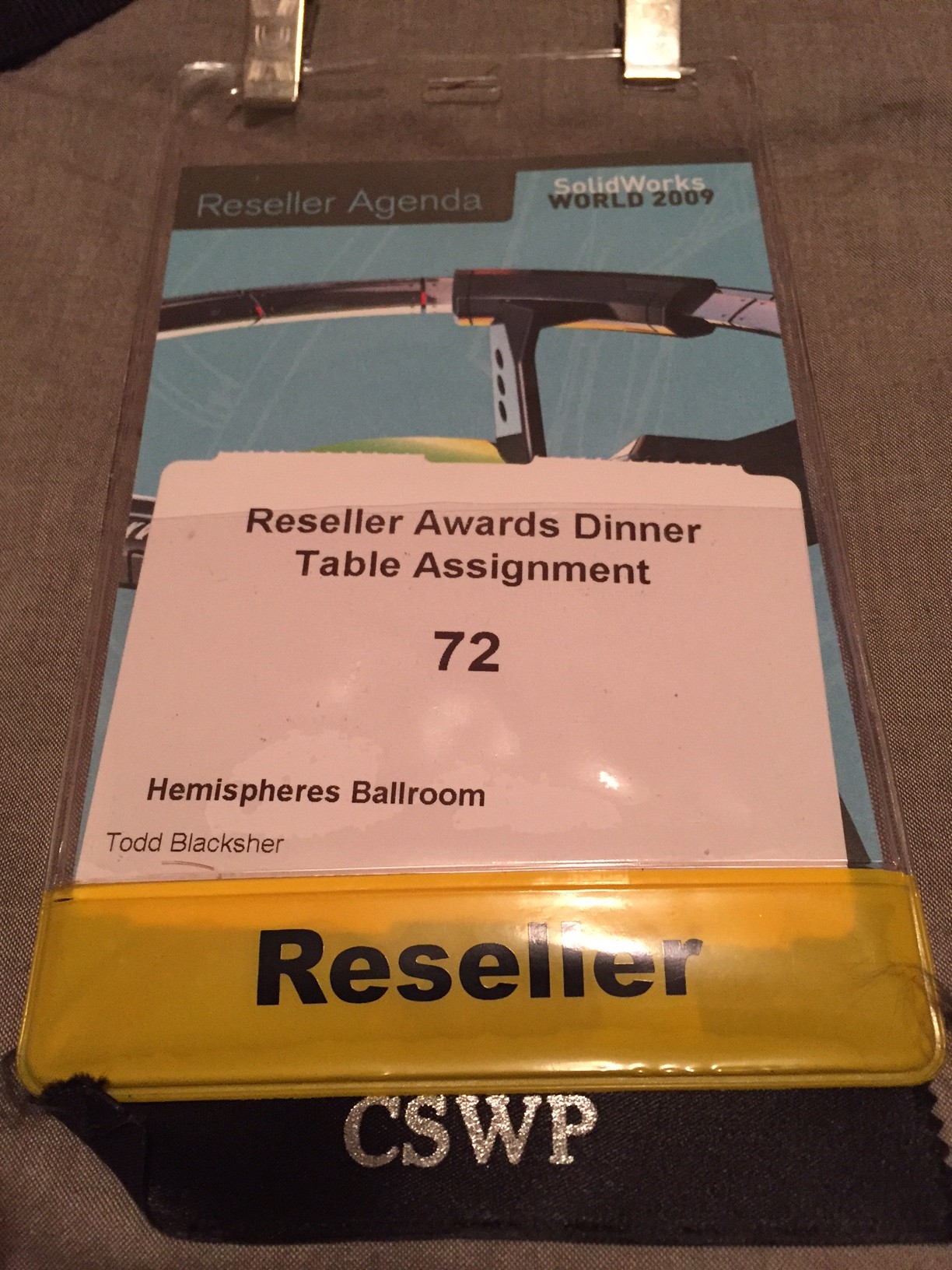 When you are with a VAR, you often don’t know whether or not you will be able to attend SolidWorks World – It does help your odds significantly if you are selected to present at the conference.  I submitted a presentation for SolidWorks World, but it was not selected (I’m not sure if that was for 2008 or 2009.)  This time around I was lucky enough to attend SolidWorks World in Orlando because my salesman and I sold the most seats of SolidWorks for our reseller in 2008, and attending the conference was our reward for a job well done.  This was also the first (and only) time that I attended the conference without my wife Jade.  (Anyone that knows me and my wife, know that we share a brain, so you can only imagine how “well” I functioned being away from her for almost a week.)

The economy was struggling, and the AE’s were sharing rooms to help keep the costs down.  It was hitting everyone, Jeff Ray talked about one of the User Group Leaders that had been recently laid off by his company, but he still found a way to attend the conference.  That leader was Rodney Hall – I didn’t know him at the time, but I know him now, and he is a truly fantastic guy.  It was not a big surprise to anyone that he went to work for a great company.

Richard Branson was one of the Keynote Speakers, and he sat down for a truly amazing interview on stage.  I had always admired Richard, and that increased when it was announced that he had contacted another presenter about wanting to help fund his project.  (It was a fledgling company with a great idea, they were hoping to get it off the ground, Richard had contacted them while he was on his way to the airport, and said that he really wanted to help make it happen – how awesome is that?!)

John Hirschtick, one of the founders of SolidWorks, discussed his vision for the future of CAD.  Meanwhile, in the Partner Pavilion, Microsoft had their latest offering, the Microsoft Surface Table, and it was running SolidWorks – it was very cool, albeit somewhat interesting to design in SolidWorks without a mouse or a keyboard, just using your fingers.  It was like sitting at one of those cocktail table video games and “working.”

There were some people from New Balance shoes discussing how they use SolidWorks to work through shoe design before they move into making actual prototypes – these were some of the most complex single part designs that I had ever seen! (If I remember correctly, some of the models for the soles of the shoes alone had over 1,700 features!)

A couple of employees from Sony Ericsson were on hand to take us behind the scenes of the design of new cellular phones.  This was extremely interesting to me, because I got my start designing antennas for cell phones (this was way back when the antenna was on the outside of the phone, and you could pull the antenna up for better reception on some phones.)

The offsite event was at Disney’s Animal Kingdom – The ONLY people in the park were those of us attending SolidWorks World!  No waiting in lines, food & drink everywhere, the only thing missing was Jade . . .

It was announced that SolidWorks World 2010 would be held in Anaheim.

Unfortunately, I did not have a crystal ball to tell me everything that would happen before I would be able to attend SolidWorks World again . . .