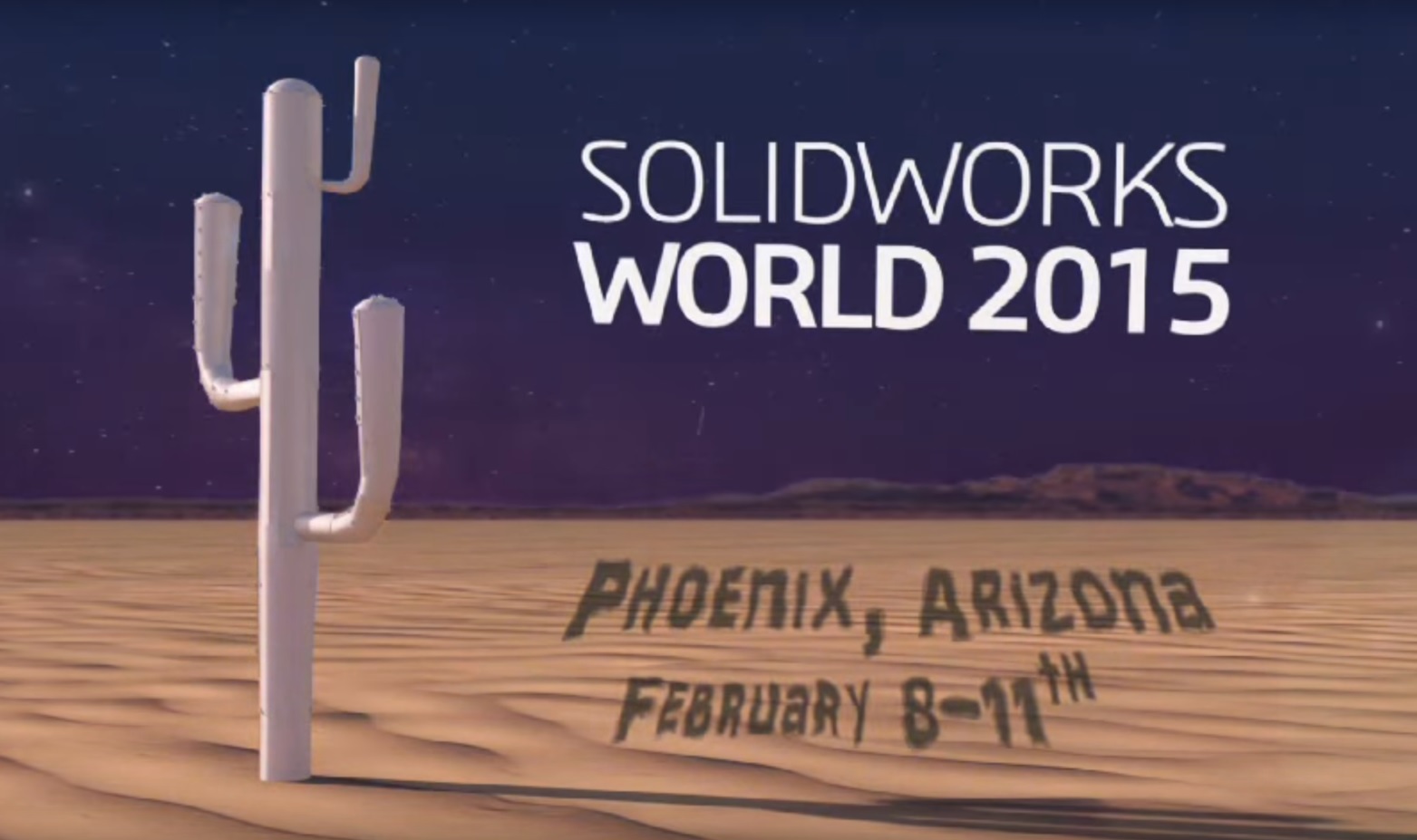 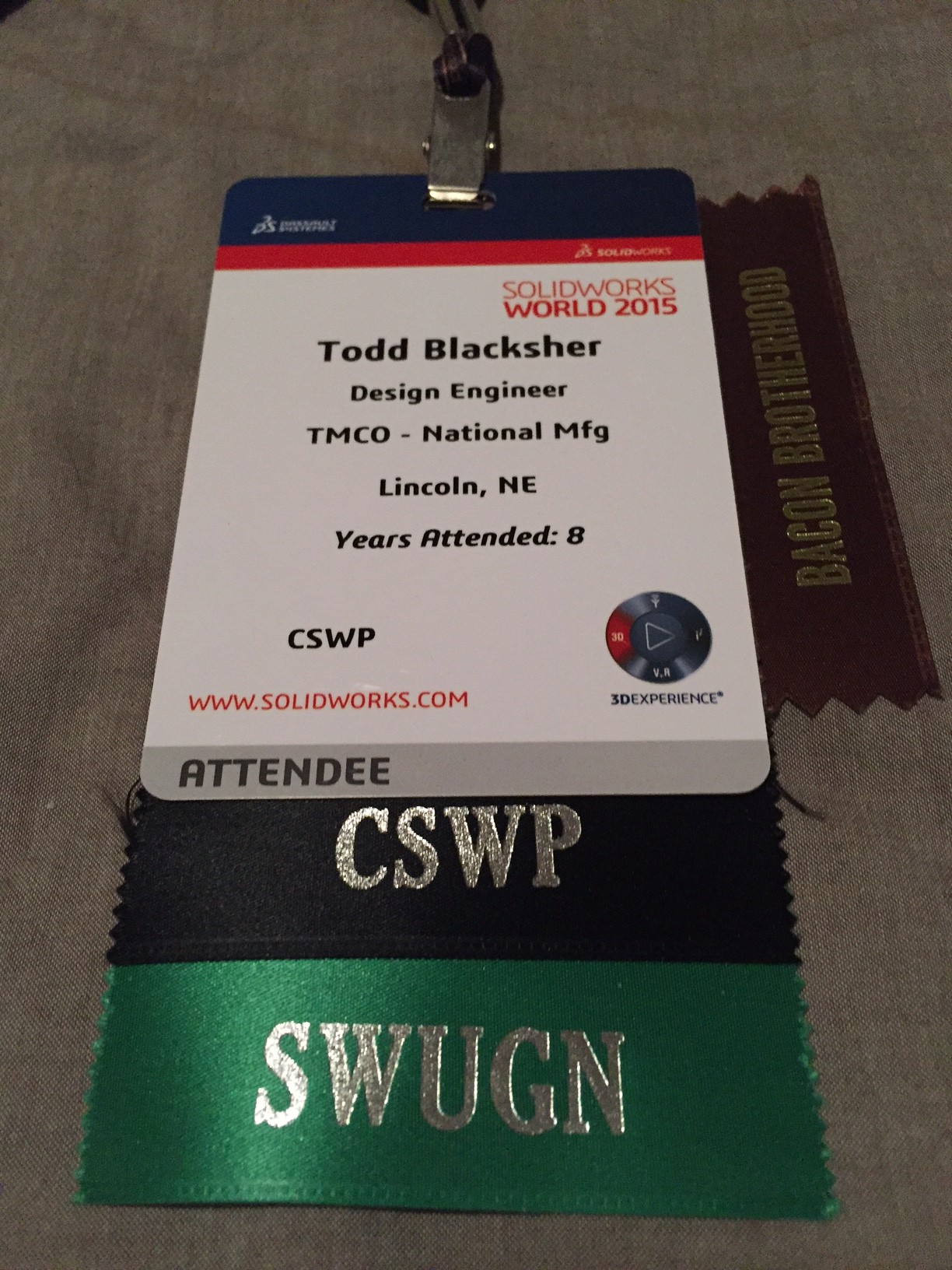 So many things to look forward to . . . First and foremost, the warm Phoenix weather (Nebraska is not exactly “balmy” in February), my brother and his wife live in Chandler, so we would get to hang out with them one of the nights, and they announced that Michio Kaku was going to be one of the keynote speakers! (Jade and I are really big fans.)  When we were booking our flights, we found a direct flight to Phoenix – that’s right, NO LAYOVERS!  This also meant that our little travel game of “Betcha they’re going” would be a little more difficult.  (This game involves sitting in the airport, watching people, and trying to guess if they are going to SolidWorks World.)  The funniest part was that we ran into two guys right after we got out of the car, we didn’t even make it into the terminal!

There may have been something else that had me so excited . . . Oh yeah, In 2014 I was appointed to be the Southern US Representative for the SolidWorks User Group Network! I would be attending as a SWUGN Committee Member!  This called for cool new keys – 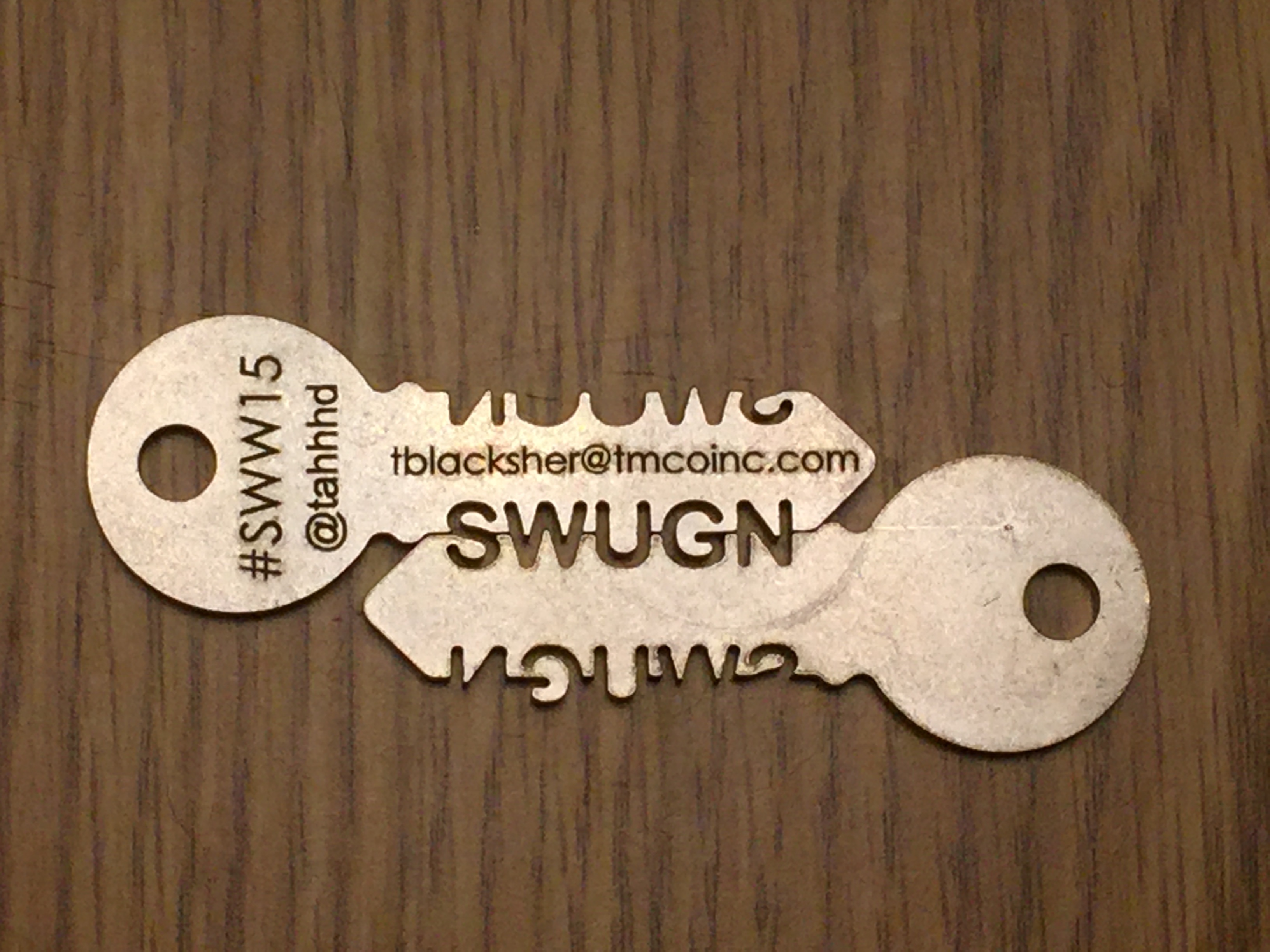 Let’s get this party started, on to SolidWorks World 2015! 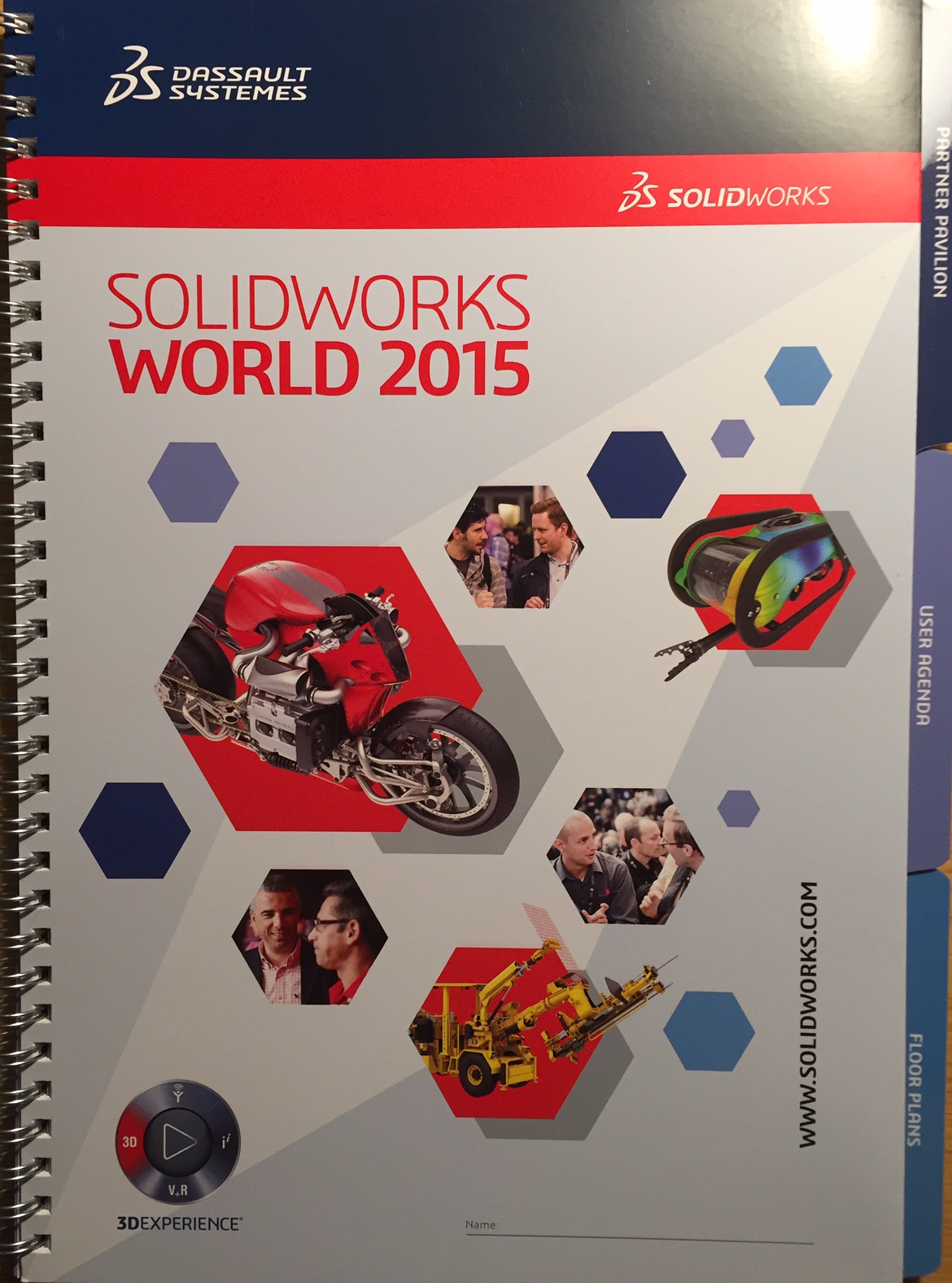 Monday’s General Session started out with an announcement that Bertrand Sicot would be stepping down as CEO to take a new position with Dassault Systemes.  It was announced that Gian Paolo Bassi would be the new CEO. (I really like GP, he became a member of the #baconbrotherhood at SWW15, and you could tell that he was having a lot of fun at the conference!)  Chris Goodine was on hand to demonstrate Thalmic Myo – an armband that allows you to control devices, apps, even SolidWorks!  Former CEO of MakerBot, Bre Pettis was on hand to talk about the next industrial revolution – “Inspiring” seems like such a small word for his presentation, it was absolutely unreal.

Tuesday is always one of my favorite days, mainly because it is when Richard gets some stage time to talk about the User Group community.  One of the coolest things about having been to SolidWorks World so many times is that you start to know many of the people and become really good friends with them.  (SWW15 was my NINTH time at the conference!)  This means that I knew the people that were winning the User Group awards – Group of the Year: San Antonio (I presented at one of their meetings), Group Leader of the Year: Denny Bahl & Don Glaske (I have worked the SWUGN booth with Denny several times), Michelle Pillars Community Award: Jeff Mirisola (I sat next to Jeff at a DriveWorks Training/Certification Event) – All of my friends won!

Marie Planchard discussed Women in Engineering, and brought Bettina Chen on stage to talk about Roominate, her engineering tool that is designed to get more girls into engineering.  Marie announced that there are now over 2 MILLION licenses of SolidWorks Education installed around the world.

This was all leading up to what I had been anxiously waiting for since they announced the keynote speakers . . . MICHIO KAKU!! 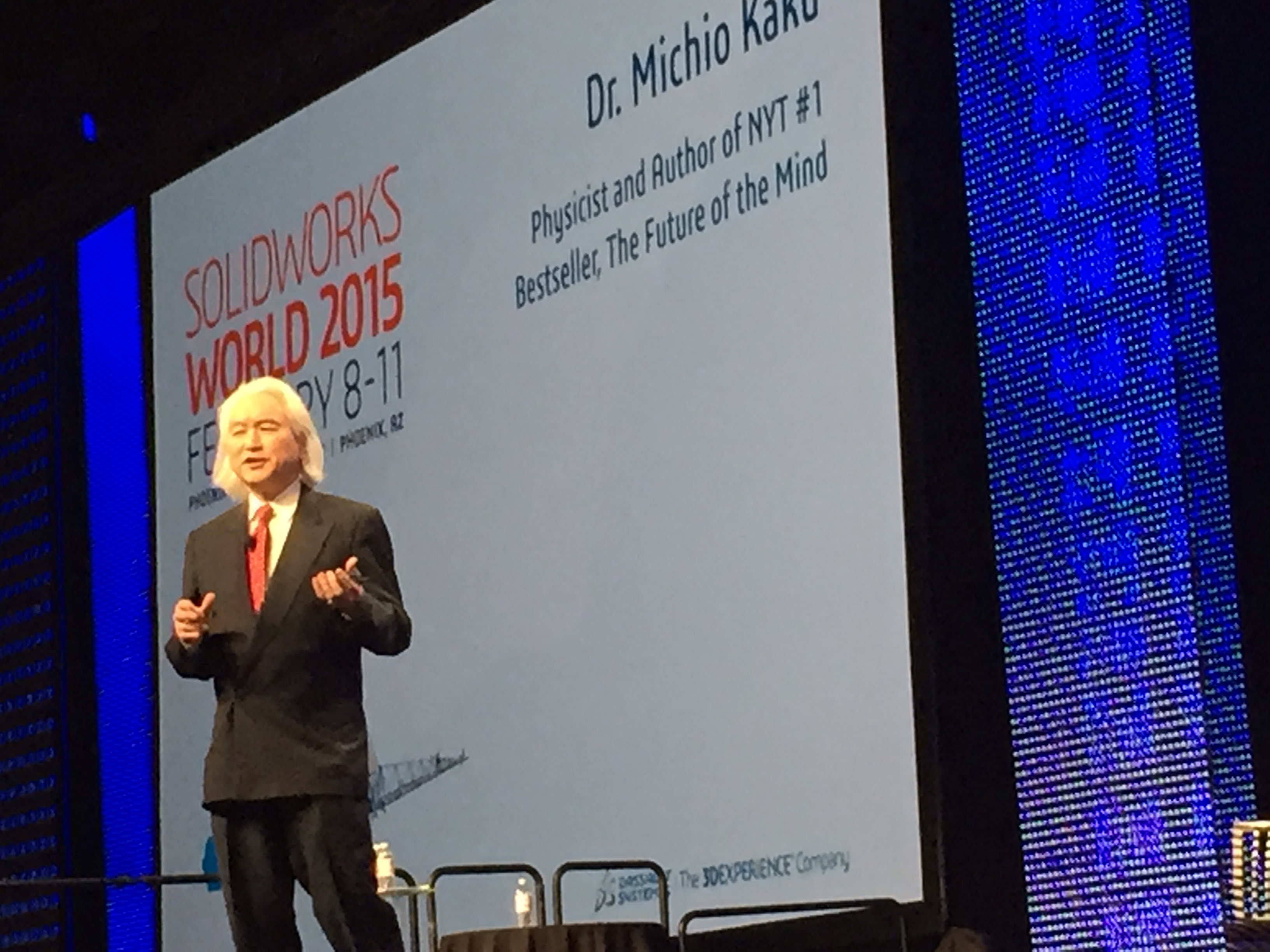 Michio talked about inventing and inventions, and then moved on to his vision for the future.  One of the really cool products that he talked about was a smart contact lens that would be a lot like Google glass, but it would be directly on your eye.  He also talked about a “Robodoc” that would be similar to a mirror on your wall, it would be a part of your house, and it would be able to give instant diagnosis regarding your health, and offer suggestions for changes to improve your well being.  It seemed to go so fast, it was over before I knew it – I probably could have listened to him talk for at least another day or two.

Wednesday kicked off with GP talking about the offsite party the night before, and shared his vision of what the future holds for SolidWorks.  Jinsop Lee from Linno talked about “scoring” your designs based on how they effect your five senses – this opened a lot of eyes of people that are used to “design for manufacturing” and cost effectiveness.  There was an incredible story about Seffi Udi – he became a quadriplegic after a horrible car accident, and he began inventing devices that would allow him to continue working.  He created a 3 button mouse that he could hold in his mouth … and run SolidWorks … which he used to design his house to be fully wheelchair accessible, AND a device that would allow him to turn the pages on his kindle with a simple breath.  Seffi was in the front row, and he received the longest standing ovation from from 5500 misty-eyed people that I have ever seen . . . breathtaking and motivating at the same time.

Mechanical Conceptual was renamed Conceptual Design, the top 10 enhancements were met with cheers and sighs of relief, Model Mania was a tough one this year, there was a skit to show off some of the cool new stuff in SolidWorks 2016, and Gian Paolo announced that we would be headed to Dallas next year. 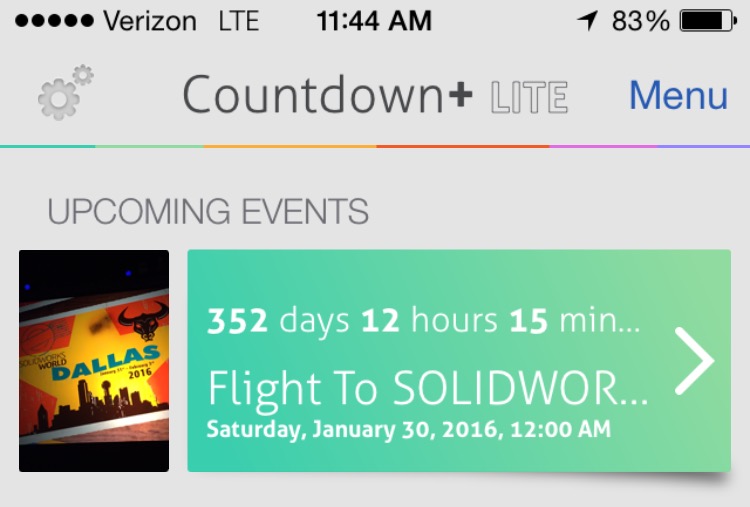